What could go wrong if we would use all our resources to turn our idea into a full-fledged product? Right, we still do not know if people actually like our idea at all. To avoid wasting precious resources, it would be wise to make simple setups that test whether our idea appeals to the user. We call these setups prototypes.

What is a prototype?

A prototype is a quick model or sample that explains the actual plans for the final product. It could be as simple as a few hand-drawn sketches that together demonstrate how the product works or a functional product that the user or other stakeholders can feel and use. In short, it is an early iteration of the product that demonstrates its core functionality.

Consider the Google Glass. It would be nonsensical to build a finished version of this high-tech product just to see if the concept works. According to Tom Chi, co-founder of Google X, the Google Glass started its life with nothing more than a coat hanger that held together a small projector, a netbook, a piece of Plexiglass, and a simple sheet protector.

At first glance, the sketch on the left does not seem to resemble the Google Glass as we know it from the picture on the right. Yet, the simple setup drawn in the sketch was a smart method to find out what it would take to test the experience of what wearing a Google Glass would feel like.

We often start out with a low-fidelity prototype. The goal of such a prototype is obtain quick feedback on the basics of new projects and designs. This means that designers often build just a few of the options that will be featured in the final design. Likewise, designers often opt to make their prototypes out of simple and easy to work with materials such as cardboard, paper, and tape. This allows the designers to make the most out of the cost-effective and flexible nature of low-fidelity prototyping.

Methods that are often used include Card Sorting, Storyboarding, and Wizard Of Oz.

High-fidelity prototypes feature a higher level of realism than their counterparts. In comparison, a functional digital mock-up of a website offers users a better understanding of the final design than a wireframe or sketch ever could. Likewise, a 3D print of a model is often more usable and realistic than a model made of paper or clay.

High-fidelity prototypes are often constructed during the later stages of the a design process, when the biggest flaws and questions of a design are answered.

The nature of prototyping encourages designers to make quick and simple tests of the solutions generated in the Design phase. Yet, in practice, some of us tend to get sidetracked on elements and details that do not contribute to our goal of testing an idea. Therefore, here is a reminder with the points you do want to pay attention to:

Sometimes we do not know where to begin. If this is the case, just start building. When we experiment with new and different creations, we soon figure out what works and what does not.

The more energy and time we put into a prototype, the more we get attached to it. Emotional ties can cloud our judgment when evaluating the effectiveness of our prototype. Not good!

When you make a prototype, take on a specific problem that you want to test. Consider other insights you gain as a bonus, but do not let these distract you from the main point.

Our aim is to find and answer the needs of the people we are designing for. Use the gaps between expectations and findings to refine your ideas. 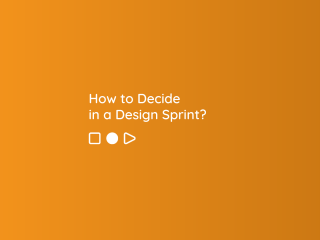 Previous Post (p) How to Decide in a Design Sprint? Next Post (n) How to Determine in a Design Sprint?